And so disaster strikes! 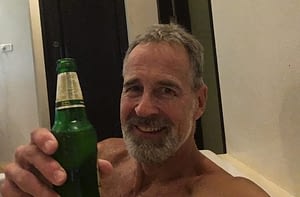 We left Venice after a lovely break for a night on Lizzie’s birthday, a charming little hotel just a few steps away from St Marks Square and headed east for Trieste and the short jump through Slovenia into Istria; the most northern part of Croatia.

it was a tense journey as we had heard lots of horror stories about border crossings in this part of the world. Anyway, Trieste was amazing, fabulous Renaissance buildings and a lovely corniche along the rocky shore, rammed with tourists. We hadn’t intended to take the coast road but Beatrix, the witch that is my SatNav decided that we should leave the autostrada and go off-piste. Well I’m glad she did on this occasion as it was an interesting diversion.

as it happens, the border crossing into Slovenia was a non event, being Schengen, all of a sudden we were no longer in Italy! Stopped at the first fuel station to buy a toll vignette seeing as we were now back on a Motorway, €15 for a 1 week pass and within 10 minutes we were on the slip road off heading for Croatia! 🤨

Arrived at the Croatian Border and expecting long delays and inspections, the Border Police were not interested, just gave a laconic wave and let us through!

And then the Disco started! Just outside the entrances there is a beach bar. 9.00pm live band through till midnight then disco till about 2.00. Just the thing you need after a long drive, a hot pitch, being turned away from the restaurant because it was too busy and having to settle for a sarnie and a bag of crisps! Not happy campers.🤨

Next day we looked to move pitch but as we were only (at that point) going to be ther for another 3 nights it was not worth all the aggro of putting up and taking down the tent again so decided to live with it. If you can’t beat ‘em, join’em. So that night, we went to the club to see what all the noise was about. It was actually a very good night.

Until Lizzie fell on a missed step. Badly twisted her ankle and had to be carried home. After a trip to A&E the next morning, turns out it was broken in 2 places. Istria doesn’t have x-ray facility or surgical unit so we had to go back to Slovenia into Isola for surgery to pin and plate the break! Another 2 days crossing and recrossing both borders whilst Lizzie undergoes surgery.

The whole trip has now to be rethought as putting up and dismantling camp is really a 2-person job. As Lizzie can no longer help we will be doing longer stops until she is finally discharged after a final x-ray then making a dash for Turkey using hotels and B&B stops along the way.